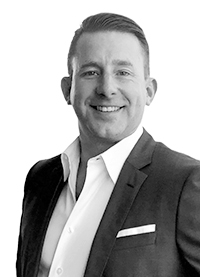 Brent is high energy with personality plus, the new generation realtor with an in-depth knowledge of social media and digital marketing. He excels with first time buyers, condominiums, millennials, and Gen-Xers and has substantial experience in condominiums and homes for personal and investment use as well as commercial properties.

Brent grew up in Toronto and watched it blossom into a luxury, world-class city. He has a marketing diploma from Humber College and postgraduate education in hotel and restaurant management, which started at Les Roches in Switzerland and concluded in Marbella, Spain, where he also became a Sommelier. Brent worked in British Columbia with the Banff Fairmont as well as China with the Kempinski Hotel and has a basic knowledge of Mandarin.

Brent grew up with two of the top realtors in Toronto as parents and found his calling in real estate over five years ago.

When he is not working, he is usually hanging out with his French bulldog “Mr. Butters” or pursuing several of his other passions, music, golf, tennis, swimming, skiing, or volunteering for the Knights of Columbus.